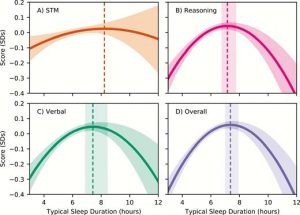 Most people will at some point experience not getting enough sleep over a period of days, weeks, or months. However, the effects of this kind of everyday sleep restriction on high-level cognitive abilities—such as the ability to store and recall information in memory, solve problems, and communicate—remain poorly understood. In a global sample of over 10000 people, we demonstrated that cognitive performance, measured using a set of 12 well-established tests, is impaired in people who reported typically sleeping less, or more, than 7–8 hours per night—which was roughly half the sample. Crucially, performance was not impaired evenly across all cognitive domains. Typical sleep duration had no bearing on short-term memory performance, unlike reasoning and verbal skills, which were impaired by too little, or too much, sleep. In terms of overall cognition, a self-reported typical sleep duration of 4 hours per night was equivalent to aging 8 years. Also, sleeping more than usual the night before testing (closer to the optimal amount) was associated with better performance, suggesting that a single night’s sleep can benefit cognition. The relationship between sleep and cognition was invariant with respect to age, suggesting that the optimal amount of sleep is similar for all adult age groups, and that sleep-related impairments in cognition affect all ages equally. These findings have significant real-world implications, because many people, including those in positions of responsibility, operate on very little sleep and may suffer from impaired reasoning, problem-solving, and communications skills on a daily basis.